A crowdfunded title on the Vita!
C-Wars, a roguelike, cyberpunk retro RTS with ARPG influences (whew, that’s a mouthful) is a Kickstarter project by Chinese/Canadian studio Onipunks. If the project would reach $32,000, a PC version would be made. One of the stretch goals (if more money than that $32,000 was raised) was a Nintendo 3DS and a PlayStation Vita version of the game. With just 3 days left of funding, this goal has been reached, and if everything turns out well, we’ll be seeing a Vita version of C-Wars. The game features an endearing retro pixel art style.

C-Wars is essentially a real-time, grid-based strategy game which is all about taking control of the battlefield. You do not only control your hero, but also back-up characters which can help you kill the enemies.

You are able to summon back-up characters to support your fight on blue blocks. Blue blocks are the blocks which you have gained control over. During the battle, there is a constant struggle over these tiles.

The back-ups are summoned soldiers. They will attack on their own, but you can give them orders in real time. You are also responsible for their lives.

The combat system looks quite frantic, but you can pause the game to take a breather whenever you want. 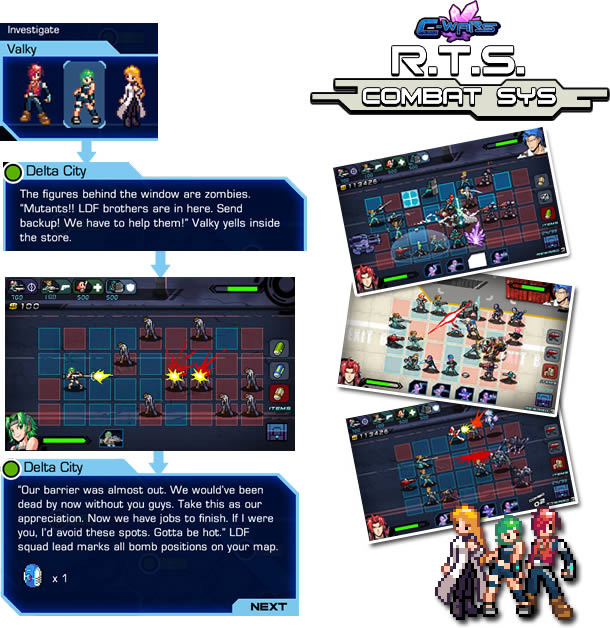 The developers have also provided backers with information on how the story will play out. There will be multiple different routes, and your decisions and victories will decide whether you save the world or not.

A global nuclear war reset humankind, and Luna base became the final outpost of civilization. 150 years later, Alpha, the largest Luna city, was infected by Crystal mutants. Despite all the precautions taken, the infection broke the quarantine barrier and hit Delta City.

Luna Council decided to use tactical nuclear weapons to terminate the two cites. You, as Sector 7’s field commander, must enter these infected areas and find out the truth before it’s too late. Your decisions in the game will determine Luna’s fate.

You can cooperate with LDF to set up tactical nuclear bombs and wipe out the infected people…but many innocent lives will be lost in the process.

Eliminate Cyber-Lover, the mafia army, to steal their research on the Crystal Clan…but you can’t unveil the dark truth behind this outbreak yet.

Or, you could choose the hardest option: fight your way out to reach the core of Alpha City, retrieve the fatal data from the old Sector 6 Research facility, and convince the Council to stop their termination.

Luna’s fate depends on you, our final hope.

For more information, check out the official Kickstarter page or Onipunks’ website. You can also download the PC alpha version here.

Sep 10, 2013
Recent Forum Activity
© 2016 The Vita Lounge with logo designs by Buramu
We use our own and third party cookies. If you continue browsing we consider you accept the use of cookies.
Accept