Some of you may have played La Mulana on the PC, for all of you who did and enjoyed it (or missed it and are interested) you have a reason to rejoice.

Playism Games just announced that La-Mulana will get a sequel. For all who don’t know the first one, its a classical Metroidvania game – one thing to note through is, that it will only be made if the stretch goal of $1.15 million  is met.

The new game will feature following things (taken right from the Kickstarter page);

A classic experience: As with the previous game, La-Mulana 2 will not feature a tutorial or a long-winded sidekick. As a seasoned explorer, it’s up to you to discover the secrets hidden within the ruins and find the truth within.

Explore on your terms: By deciphering cryptic text on the monuments scattered throughout the ruins, the player can slowly unravel the riddle of the ruins. Which part of the sprawling underground to tackle, and in what order, is up to you. Sometimes you will need to use changes in background, mysterious sounds, the strength of enemies or the sneakiness of traps to detect a change in their surroundings.

A colossal adventure: We have designed a variety of zones, and have created a mystery deep enough to encompass a gigantic cave system. This is a very large scale indie title. We predict newcomers to the series would probably clear the game in 20 to 30 hours. Because of the non-linear nature of Eg-Lana, La-Mulana 2 will have plenty of replayability.

New horrors, new weapons: Plenty of ferocious and terrifying monsters and guardians stand in your way in the depths of this new underground network. Fortunately, there will also be an arsenal of tools and weapons to help you on your journey.

Widescreen Support: The first La-Mulana was a remake of a retro-styled game that ran in a 4:3 aspect ratio, which made widescreen support impossible. For La-Mulana 2, NIGORO is developing the game’s areas and rooms with a 16:9 aspect ratio in mind, making it perfect for widescreen TVs and monitors.

Of course there is also a story! 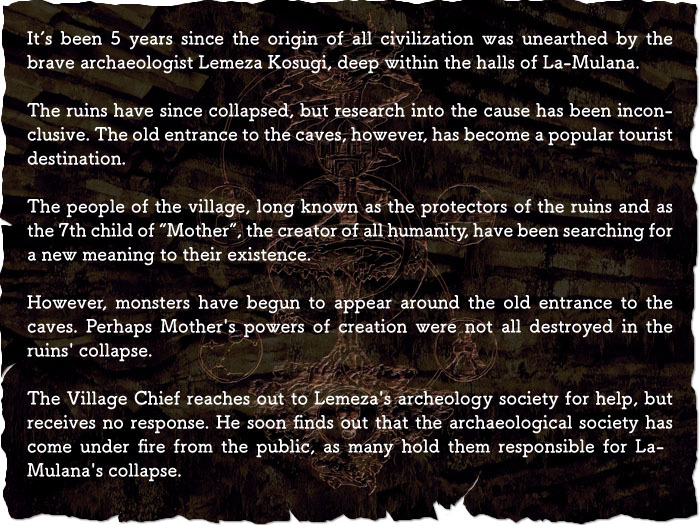 …and now on to the characters;

Some say she is Lemeza’s wife’s daughter from a previous marriage, while others believe she’s Professor Shorn’s illegitimate child. Either way, she is a Kosugi; that much is clear. With the request to search the ruins from Xelpud in hand, she travels to La-Mulana to make her archaeological debut.

Tales of his exploits in the ruins of La-Mulana may be known worldwide, but he was also responsible for the ruins collapsing, and has gone into hiding as a result. His desire to explore has not faded, however, and still finds time to go spelunking in secret.

After revealing the “treasure of all life” brought back from the ruins of La-Mulana, he returned to an hermetic life once more. Although he quit after finishing his research on “The root of all life”, he finds himself slowly drawn back into the world of archeology.

Upon the collapse of the La-Mulana ruins, his life as the 7th child came to an end. He’s been spending his time running the “La Mulana ruins tourist spot” as a method of once more finding a purpose in his life. As a result, he’s become quite wealthy, an now lives a life of luxury full of beautiful women and fast cars.

Since being released from the ruins, she has been happily living above ground, pretending to be a young woman. Using her amazing knowledge of history, she has become treasure hunter. She’s also grown quite fashionable.

Here a few pieces of artwork.

More information can be found on their Kickstarter page, via the link below this post.

Atelier Sophie: The Alchemist of the Mysterious Book

Stick It to the Man